This cluster has higher rates to bypass the tedious grinding so you can get building quicker, into pvp quicker, and back on your feet quicker after an ass whooping for that sweet sweet revenge.

By the way. This server does not wipe! Except for that one time... When the settings significantly changed... Wiping may have a fun, fresh, and exciting feel for a few days or so, but for those who invest in a server it can be annoying, pointless, and needlessly disruptive. A lot of servers like to wipe to give that fresh feel to everyone. With higher rates the fresh feel doesn't last long. We want long term players here. Players that care to invest their time and know a server wipe will not destroy that investment. Besides, players contribute to wiping each other anyway. Wouldn't it be more rewarding to join a server as the underdog, make friends, build up, then go after the big dog and put a muzzle on them? That's what a Badd Neighbor does!

Check out the RULES page to see if you can handle following them, the SETTINGS page to see if it fits your play style, and also the MODS and PLUGINS page in case you are looking for specific mods to play with. Remember... this is PVP... hide your valuables and expect to be raided.

Come join our community and help the server thrive.

- You are allowed turrets at ONLY 2 locations per map


- It is good practice to have backup plans in case you get raided
- Its unfortunate server settings and rules cannot please everyone - you dont HAVE to play here :)
- Good PVP sportsmanship and trash talking is encouraged - this is ARK
- You can trash talk or raid the server owner or any admin - they are players not gods
- Server population is important so understand how NOT to raid players so much they want to leave the cluster
- If you truly dislike another player so much you want them to leave the cluster you probably dont belong here
- Bring over your friends from other servers or even better invite your enemies
- Streamers are welcomed, watch their streams to support them
- You are allowed to cover your rider on a platform saddle/raft/motorboat/skiff
- PVP can be dirty, playful, serious, fun, or demoralizing so be ready for it :D
- Tribe owners will be held responsible for their tribe where applicable - OWN your tribe

- It is commonly known that ARK is not a very well-polished game. Similarly to being on official, if you lose stuffs due to lag, game issues, random glitchyness, oddities, crashes, mods, plugins, rollbacks, or not knowing something can happen the way it does; it is gone and will not be replaced unfortunately. It can be very time consuming to verify and validate each occurrence since it happens too often. It is also too easy for someone to claim false incidents. If you lose stuffs due to something caused directly by the server owner, then there is possibly hope for you.

- You are asked to follow the rules of this server. If you do not follow the rules for whatever reason you have there are different courses of action that will be taken dictated by the situation and severity. You may be asked to correct the issue. You may have creatures, structures, items, or your character deleted. You may even get a ban or temp ban. It is the player's responsibility to read, understand, and comply with the rules. Tribe owners have a responsibility to ensure certain rules that are within their control are not broken due to lack of organization.

- If you see someone not following the rules, speak with them directly if possible. To escalate the issue join discord and post screenshots or videos in the Report Violations channel or PM the server owner.

Mods that are run on this cluster:

StackMeMore - alters the stack quantity and weight of items
Structures Plus (Open Source) - adds tons of useful items and structures into the game
Naj's Speedy Flyers - custom settings for flyers to include an increasable speed stat
Protected Passives - passive tames can become safe from damage when certain criteria is met
TCs Auto Rewards - rewards players for playing every 15 minutes and every 24 hours
Editable Server UI (WBUI) - shows server rules/info by pressing the F1 key in game
BaddNeighbor Super Spyglass - lets you view a creatures level up point distribution
The Last Grapple - reusable grapple with no crossbow reload glitch!
Classic Armors Skins - craft skins to make you look like you are wearing other armor

Mods that are being looked at for implementation on this cluster: 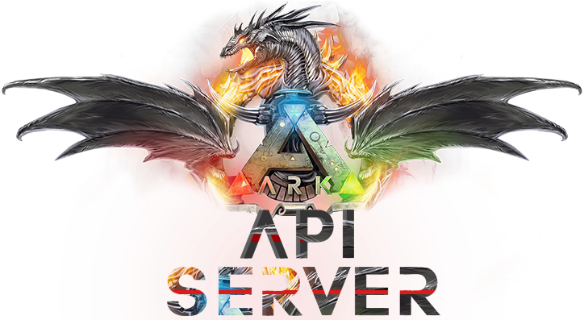 Plugins that are on this cluster:

Advanced Chat - Allows chatting across all maps on the cluster and with Discord
ARK Adverts - Used sparingly for timed notification messages like a reoccurring MOTD
Ark Bot Helper - For admin use with Ark Bot
ArkModifiedSpawnLevelDistribution - Maps like TI, SE, AB, and EX now spawn creatures similar in wild level to RR, VA, GE, and TC
Custom Chat Commands - Add new chat commands to your server e.g. /help /site /ts /discord
Anti Cannon Raid v1.1 - Cannons deal 0 damage to structures
No Join Message - Player join notifications are disabled (because the server setting doesnt work)
No Wander+ - Sets Wander, Follow, and Ally Look to disabled on new born babies, sets them to passive, sets their Attack Range to High, and also does not prompt for name when you claim them
RCON Scheduler - Used to destroy and force respawn of all wild beehives to increase fps when around them, also used to destroy wild eggs and egg nests daily so they never show as spoiled before pickup
Structures Limit - Used to limit the quantity of certain structures
ARK: Tribe Log Relay - Allows tribe owners to send their tribe logs to a Discord channel of their choice
WeaponDamageCustomizer - Alter weapon damage to wild/tamed creatures or players

If you enjoy the community, the players, the owner, or the cluster setup and you feel you want to show your support, donating is one way to do it.

Donations will never be used as a way to gain an advantage over others.

If you choose to support Badd Neighbor via donation you will be offered a few things as a thank you for your support:

The first is a custom icon to display next to your name in the games chat window that is visible when you send messages. Similar to how admins have a star in front of their names you can have a custom icon in front of yours. These icons can be pretty much anything from a dino, structure, weapon, tool, ammo, armor, buff or consumable item that is in game. If there is a picture or icon of it in game somewhere it can probably be used. To get ideas you can check out a robust but incomplete list here HERE. If someone already has an icon picked out no one else will be allowed to use it unless they are ok with it.

The second is receiving a custom color to your liking for your discord name in the cluster's Discord. Any color can be used as long as you can find the 6 digit color code. You can find colors and their 6 digit color codes here HERE. The codes will always start with a # and are 6 characters long.

The third is to have your name added to the Donator role in the cluster's Discord which will display your Discord name at the top of the member list above other members, the bots, and owner's name.

Stuff that donations could possibly cover: 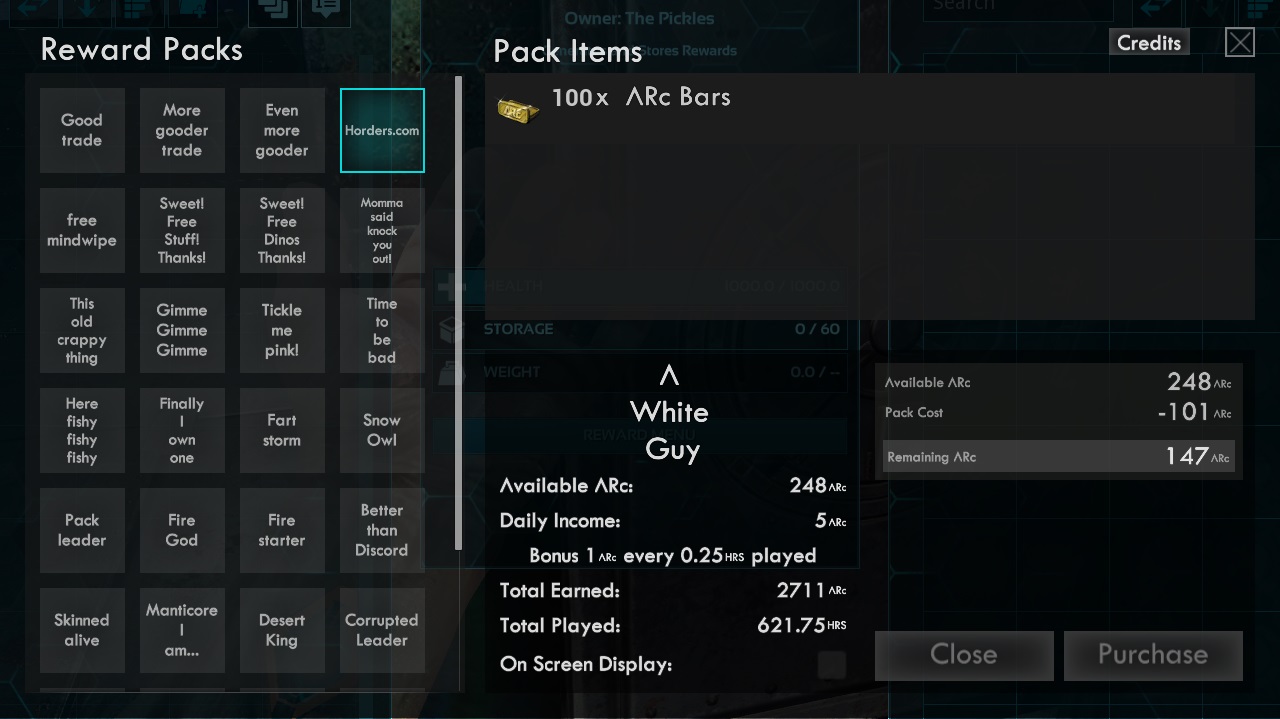 - Free starter packs are available in the vault (lower level farming type creatures, metal tools, starter armor)
- Players earn ARc (Auto Reward Credit) points over time for playing on the server and being active
- 1 point for every 15 minutes of being logged into a map
- 5 points for every day you have logged in to that map
- Points are accumulated on a per map basis
- Each map keeps track of points separately and individually
- ARc points are used to purchase reward packs from the Reward Vault
- You can convert your ARc points into an in-game item called ARc bars
- ARc bars can be used for trading with others, pooled together by tribemates to obtain more expensive rewards, or can be consumed to add points back into your vault for safe keeping
- You can have a maximum of 500 points in your vault before you stop accumulating points. You will have to spend the points on packs or you can turn them in to ARc bars and stash somewhere.
- Select higher tier items have ARc bars added to their crafting recipe
- Events on the cluster will reward players with ARc points/bars
- There are several dozens of different reward packs to choose from. To name a few: 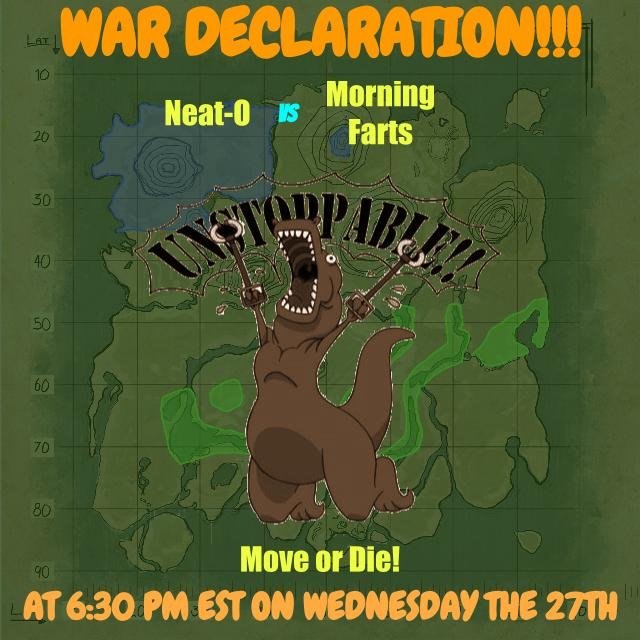 (Bad Neighbor was a safe base concept rule set. Players were not allowed to attack bases or anything within the base until they submitted a declaration for war to raid other bases and a date and time was agreed upon. The above photo was the first ever declared raid on the server.)

The history of Bad Neighbor started back in November of 2015 shortly after ARK was released to Early Access on Steam. It was around till May of 2016 before it went into hiding only to emerge several years later in December of 2018 bigger and baDDer than before as BaDD Neighbor. Double the D's, Double the... everything else.

After starting up for the second time it has been going strong with no plans to stop! 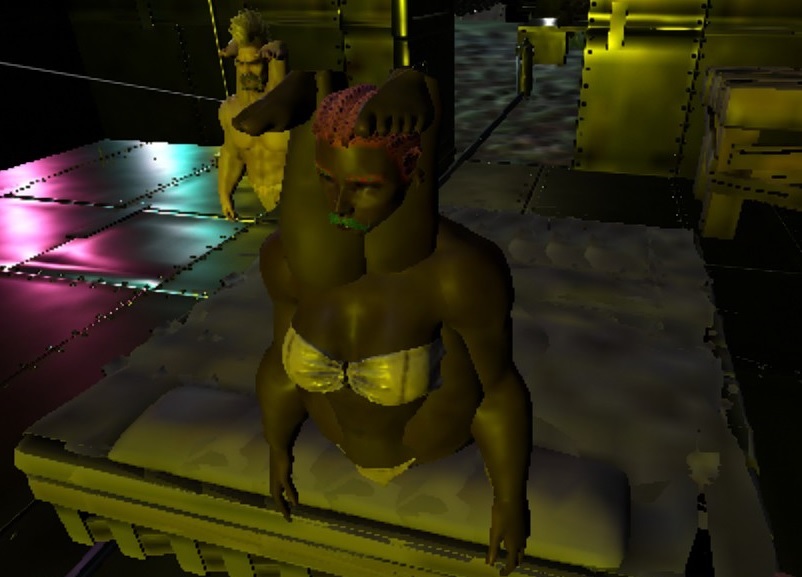 This page will have a few how to's and tips for letting people learn a few tricks of the trade. They may not be the absolute best ways to do things, but they ARE ways to do them.